Palmholz Co., Ltd. has technologies and patents for transforming oil palm trunk (OPT), an unused resource seen as lacking value since it lacks the strength to serve as a construction material, into high value-added wooden products.

Many of these technologies were originally developed as part of pressurizing technology as part of research into increasing the strength of cedar, which became an issue due to its limited applications after harvesting as many such forests were planted in Japan after WW2.
By compressing cedar, which was inappropriate for flooring applications due to lack of strength, it increased wear resistance strength enabling use as flooring. This patented technology was researched and developed by our predecessor, My Wood Two, Co., Ltd.

Oil palms are a kind of palm tree planted in vast number as part of the national policies of Malaysia, Indonesia, Thailand, and Columbia. It is famous as the plant from which palm oil is extracted. The fruits and shells of oil palms are used for cooking oil but up to now the trunk was not usable. Oil palms produce less fruit after reaching 25 to 30 years so they must be harvested, and new trees are planted. Unused OPT resources were buried in soil leading to issues of soil contamination.

Palmholz has researched applications for these unused OPT resources.

Oil palm continues to be used for the parts other than the trunk. The white portions of the fruit (the flesh) are a valuable oil used in cosmetics and cooking. The fruits are available as generic cooking oil at supermarkets and other vendors. The dark part of the fruit is used in bioethanol. Empty fruit clusters of fiber after harvesting the fruit are used as a paper packing material.
However, the trunk has low strength and when left after harvesting it rapidly rots due to it high starch and sugar content. Applications had been difficult to find and the only way to dispose of it was to bury it. By burying these trunks in the soil, it caused many kinds of bacterial growth leading to soil contamination and environmental issues today.
We began research into methods to use OPT resources to prevent damage to the natural environment from these unused materials.

When starting research, we gathered specialists that researched cedar pressurizing technology at our predecessor research company based on investment by government agencies, My Wood Co., Ltd., to form TEAM Palmholz.
As a result of this research over 12 years, many patents and know-how related to OPT were obtained to establish OPT pressurizing technology. 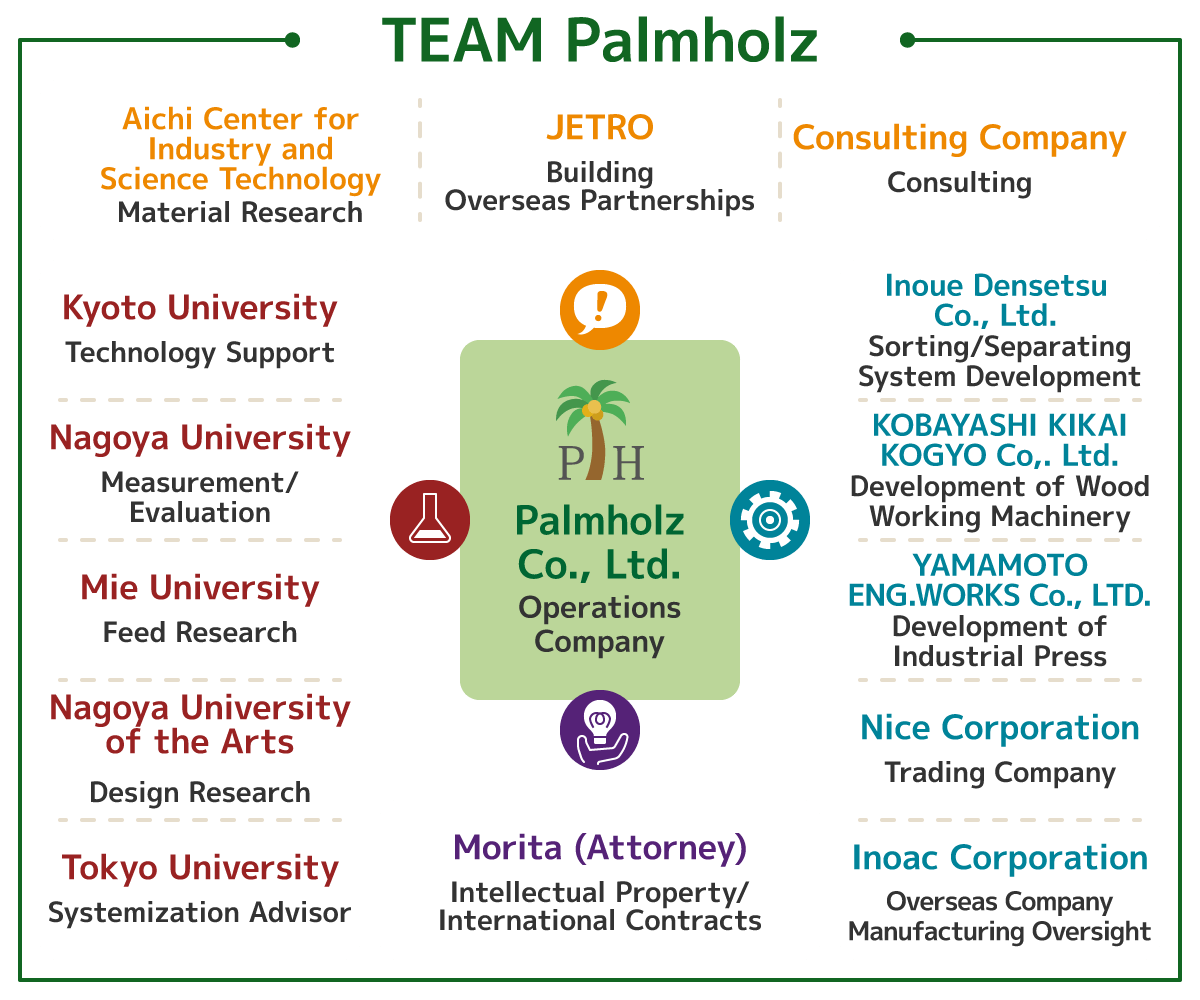 With the success of our research, it is possible to treat OPT for making wood products, transforming this unused material into a valuable resource. And that’s not all. Over 12 years of research we used separating and sorting of the OPT structure creating research into new plastic filler, livestock feed and more.

Wood products can be used as materials for construction, furniture, and exterior products. The self-adhesion functionality is insufficient adhesive strength for supporting outdoor use, but we succeeded in developing exterior wood products that can withstand outdoor use by adding agents made from natural materials.

Radial vascular bundles are part of the internal structure of OPT used for transport of moisture and nutrients. Mixing it with polypropylene promotes elimination of plastic use. Reducing plastic use by even small amounts is expected to contribute to solving issues such as marine plastic.
Tests of mixing radial vascular bundles in polypropylene resulted in 16% higher bending strength, 1.5 times the tensile elasticity, and 17 degrees higher load flexibility temperature compared to pure polypropylene, heightening expectations for use as a plastic filler.
Please see the test resultsdescription for yourself.

Parenchyma is the part of a plant that takes up most of its material including stems and roots. It can be used as feed for livestock.
When tested with chickens, there was no change to the meat quality between chickens given normal feed and those given feed with 50% parenchyma. This study was shown by the Aichi Food Research Center. When used as chicken feed, it is expected to lower costs for poultry farmers. It was also recognized as being useful as a mushroom bed in mushroom cultivation. 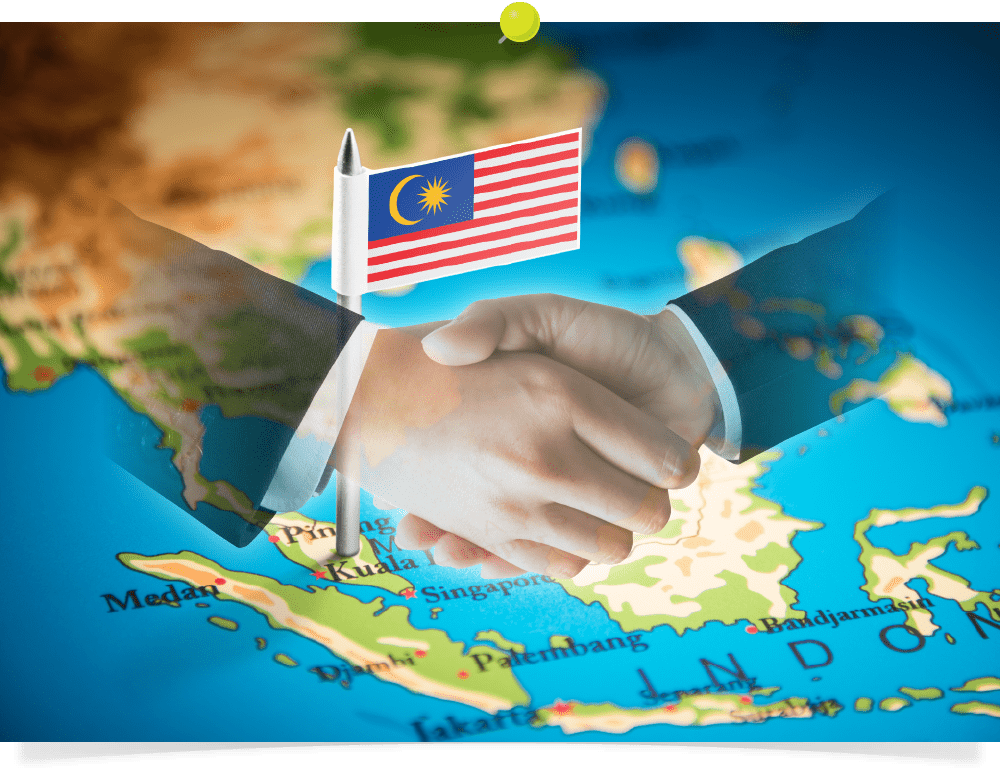 Oil palm trunk (OPT) is made from wood products that are friendly to people and the global environment that do not use petrochemical materials enabled by the technology of Palmholz Co., Ltd.
Many schools, city halls, gymnasiums and libraries have used this material for floors, tables, interior for traditional inns, bridges for ponds in Japanese gardens, bench materials and other indoor and outdoor applications enabling verification of the safety and reliability of these products.
In order to develop business applications of OPT we have established a stable supply chain for OPT, supported mass production technologies for OPT wooden products, researched and developed manufacturing using OPT, built up production of palm oil with the purpose of sales of products using OPT and established an operating corporation in Malaysia (scheduled for spring 2021), there OPT use has become an issue.
We are on the lookout for business partners who want to develop OPT projects with our operating corporation.
If you are interested in the applications of unused OPT resources and would consider partnering with our operating company to develop OPT businesses, contact us using our inquiry form.